Astronomical events of the month of November 2022

This month we will remember the first documented planetary transit. We will enjoy a total lunar eclipse, as well as other attractive astronomical events, including several planetary approaches, the open cluster of the Pleiades and it will be a good time to observe planets such as Jupiter, Saturn and Mars. As if that were not enough, we have the phases of the Moon.

On November 7, 1631, Pierre Gassendi uses a telescope and the projection of the image of the Sun on a paper screen and carries out the first observation and documentation of a planetary transit. As Kepler had announced, Gassendi was able to see how Mercury passed in front of the Sun. The event served to verify the disproportion between both bodies, since the planet appeared as a tiny black dot on the illuminated surface of our star, which was in against the classical conception of the size and movements of the planets around the Sun, helping to understand, even more, the behavior of sunspots. Gassendi was an enthusiast of astronomical observation, which led him to make the discovery of five moons of the planet Jupiter, in addition to the re-observation of the four Galilean moons, already discovered, of course, by Galileo Galilei. 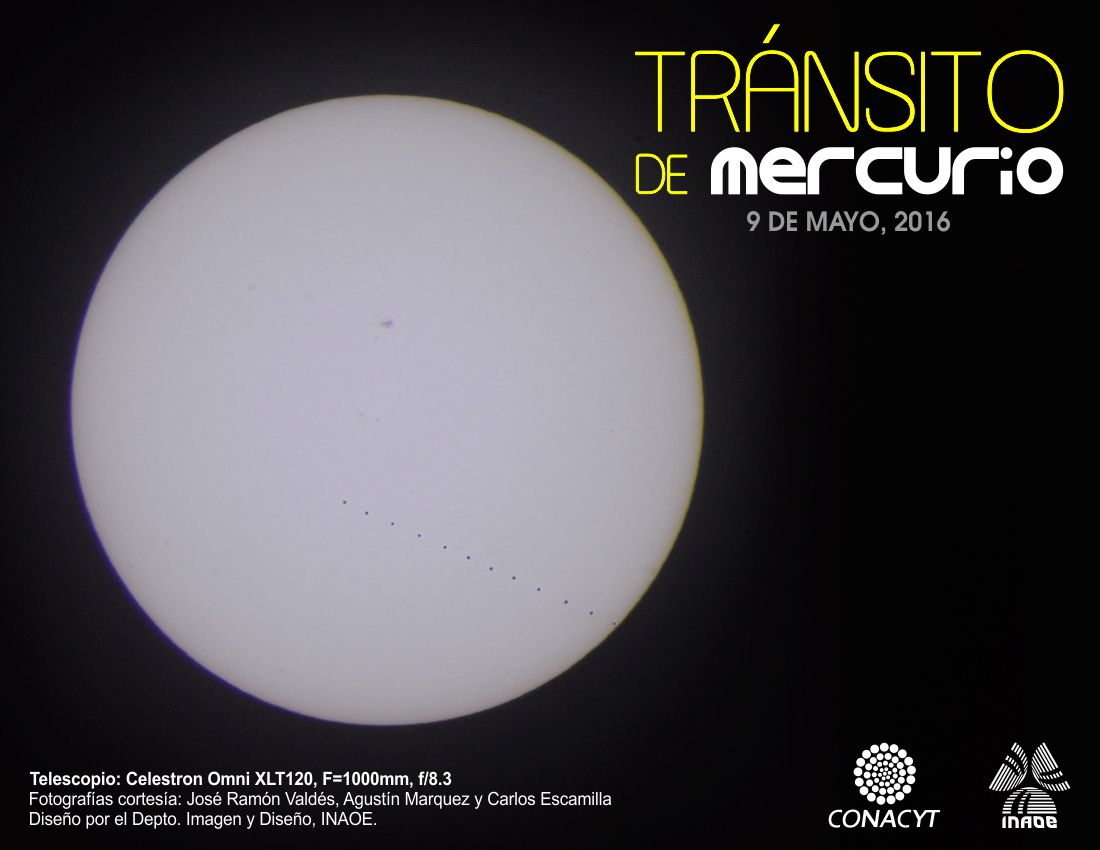 At the beginning of November we will have the conjunction and approach of Jupiter and Saturn with the Moon. On the first day at 15:08, the Moon and Saturn will be in conjunction, our satellite will be 4° 11' south of Saturn, in the direction of the constellation Capricorn. On the other hand, on the 4th at 2:23 p.m., the Moon and Jupiter will also be in conjunction, our satellite will be 2° 23' south of the gas giant, but in the direction of the Pisces constellation. Finally, on the 11th at 1:46 p.m., the conjunction of the Moon and Mars will take place, when our satellite passes 2° 27' north of Mars, in the direction of the constellation of Taurus. It is important to mention that two bodies are in conjunction if they share their equatorial coordinate of Right Ascension, giving, therefore, an apparent approach between them. Although the conjunctions happen at times that would not allow us to observe them, for some nights it will be feasible to enjoy these approximations and, best of all, no auxiliary instrument is required to recreate the event. However, if you want to go further, binoculars or a small telescope will be enough to distinguish some aspects of the lunar surface, locate the Galilean moons of Jupiter or enjoy the incredible rings of Saturn. 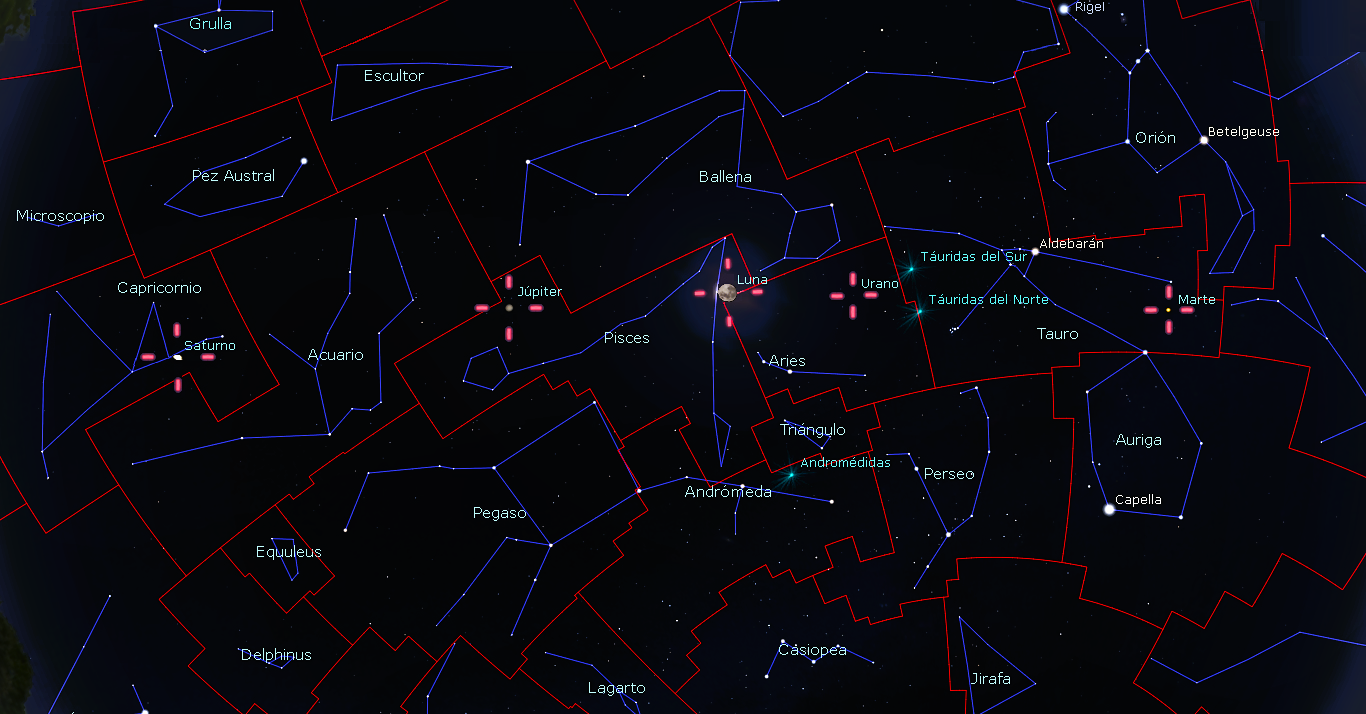 For your eyes only, total lunar eclipse

In the early hours of November 8, from 03:10 to 06:49 hours (Central Mexico time, between 09:10 and 12:49 UT) we will have the opportunity to observe, throughout the Mexican Republic, a total eclipse of Moon. The event will be observed between 03:10 and 06:49, hours only considering the entry and exit of the Earth's umbra, this does not give a duration of 3 hours 39 minutes. The observation of the event will be interrupted, in the center of the country, by sunrise at 06:34 hours. The Moon will be in the direction of the constellation of Aries, towards the northwestern part of the celestial sphere (see the following table and figure 3). 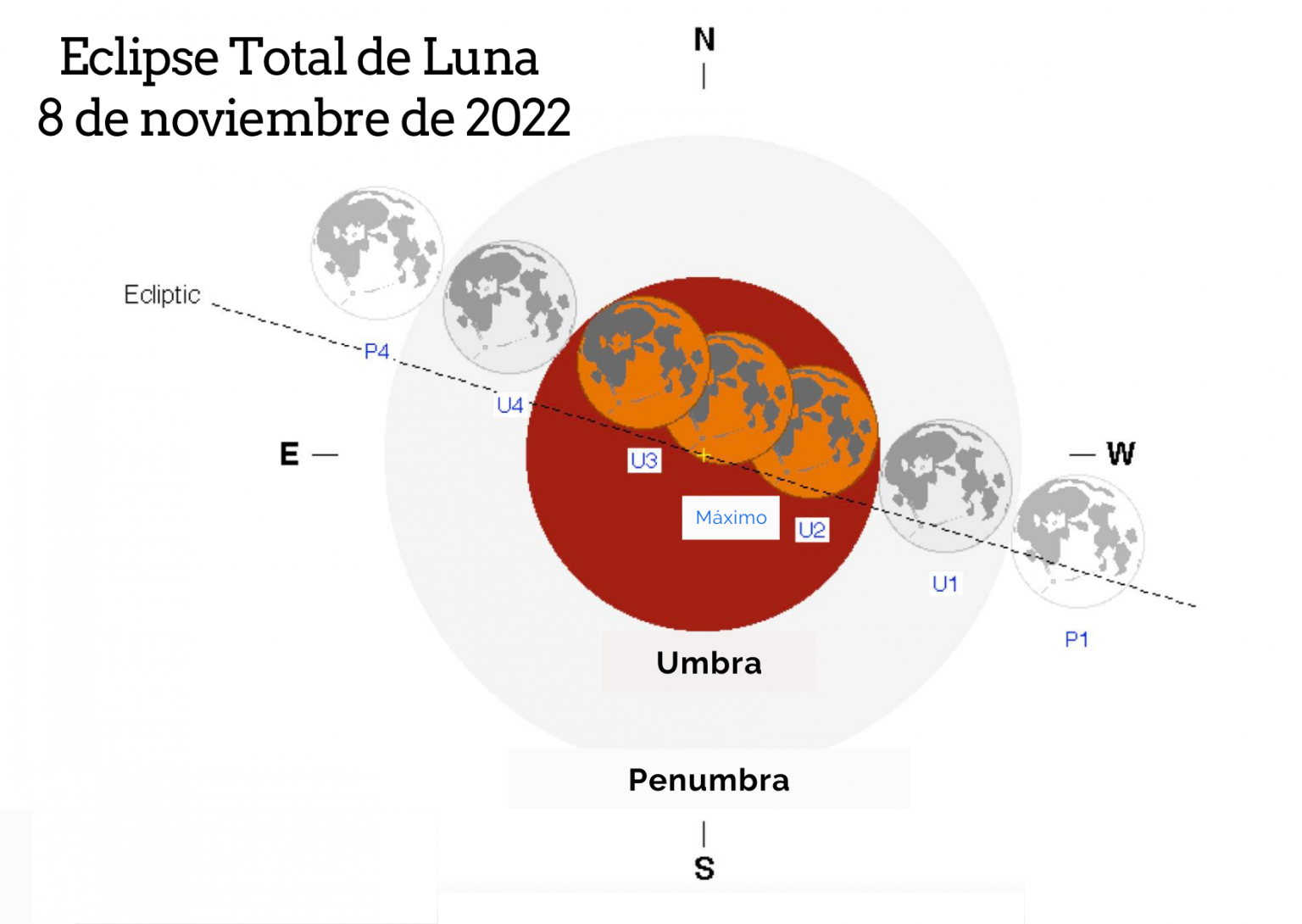 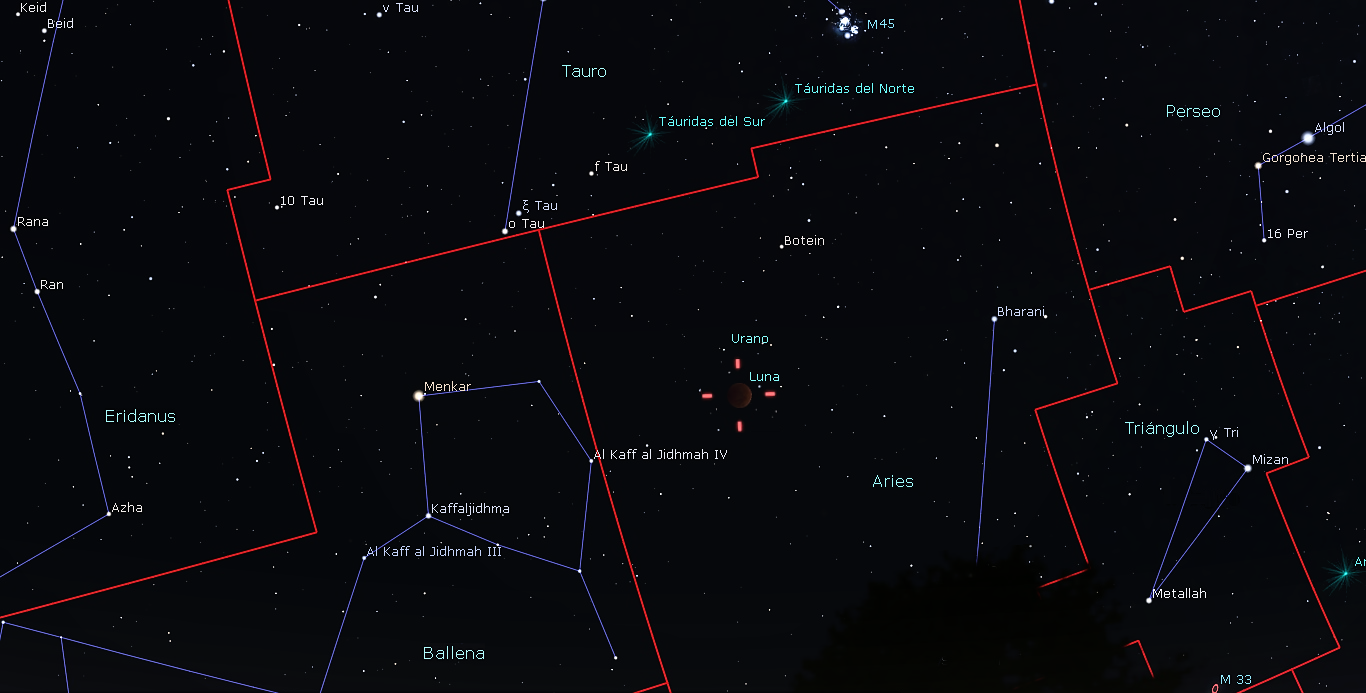 The Pleiades in Mesoamerica

The Sun, the Moon, the stars, the planet Venus and the Pleiades were vital for the religious, cultural and daily life of ancient peoples, they governed their calendars, agriculture and society itself.

It is probable that, for the Aztecs, the Pleiades were represented by Tianquiztli (El Tianguis, place of barter and commerce). With the appearance of the Pleiades, the fifth cardinal point was marked and with it, the beginning of the festivities and ceremonies of "Tie of Years" or of the "New Fire" that took place every 52 years, and began when the priests climbed the "Cerro of the Star" to observe its movement; if the Pleiades passed through the zenith at midnight and continued on their way, the gods had offered them another 52 years of life.

For the Mayans, the knowledge of dates and times was governed by Venus and the set of stars of the Pleiades. In the book of the Popol-Vuh we find stories of the Wise Fish-Earth (Kukulcán, who for many is the same god Quetzalcóatl) and his encounters with the "four hundred boys" whom he kills. With the triumph of Hunalhpú and Ixbalamqué (the twins) the "four hundred boys" are resurrected and become Las Pléyades (El Montón). Then, in the purest astronomical sense, these stars "are angels raised by the Lord" (say the Chortis), on the day of the first passage of the Sun through the zenith, when their brightness represents the return to life of the "four hundred young ” and marks the beginning of the rains (approximately May 23 in Chichen Itzá).

The Pleiades, is an open cluster close to Earth, is located 444.2 light years away, is included in the Messier catalog of 1769, is recognized as Messier 45 or M45, and also as the seven sisters. From later observations, they are associated with a reflection nebula, which is believed to be a remnant of their original parent cloud, from which they formed, and which has been ejected by strong winds from these young stars. The age of the cluster is estimated to be only about 100 million years and they have a life expectancy of 250 million more years, when the stars spread out and follow their own paths. The cluster M45, with a diameter of 70 light years, is located in the direction of the constellation of Taurus. To enjoy the spectacle offered by the Pleiades, no instrument is required, but if you want to capture details, with binoculars or a small telescope you can do it and in this way marvel at the more than 500 main stars that make up this open star cluster. 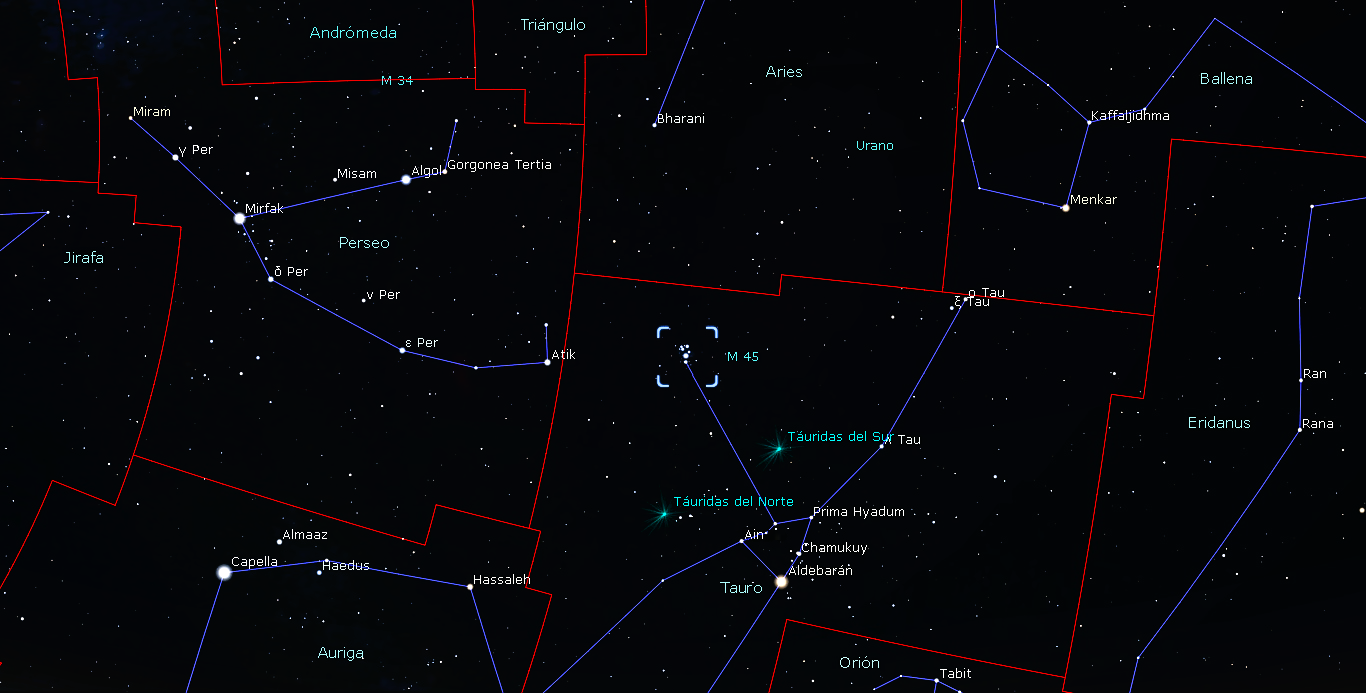 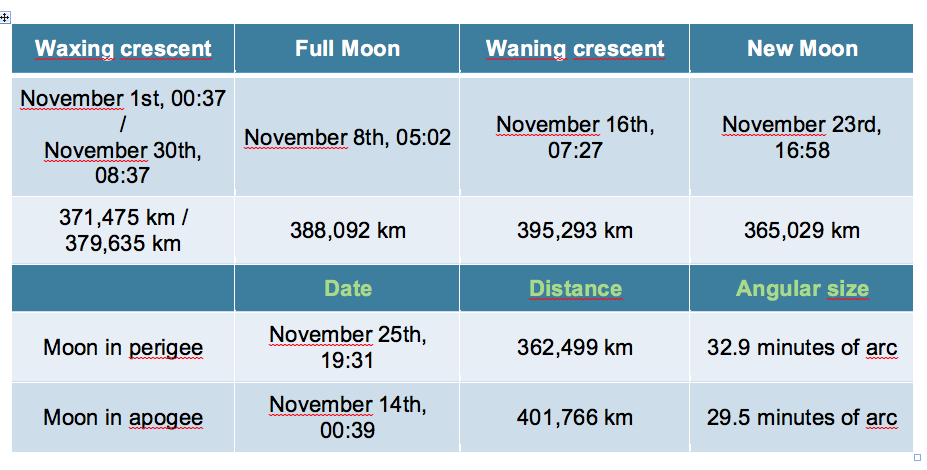 Watch the video of the events of November: https://youtu.be/A20JmqGBrDs